2017 wasn’t just a busy year for construction, it saw new innovations and technologies adopted and employed at fever pitch. Because of that, we saw innovative and sustainable facilities unlike anything we’ve seen before. We saw new methods of construction such as 3D printing and modular construction streamline processes. And, we got a peak at what autonomous equipment can do; showing what once seemed like the distant future is here.

To wind up the year, taking all of these factors into consideration, we came up with our four favorite buildings of 2017 that are examples of not only innovation, but the future of architecture.

Our first pick is Apple Park, the flashy new HQ of Apple, is known for being one of the “greenest buildings in the world” (according to Tim Cook), but its unique design is what puts it on our list.

“Apple Park has been built to reflect Apple’s values for both technology and the environment,” CEO Tim Cook said at a September 12 event. “It connects extraordinarily advanced buildings with a rolling park land to form an open and inspiring environment for our teams to create and collaborate.” 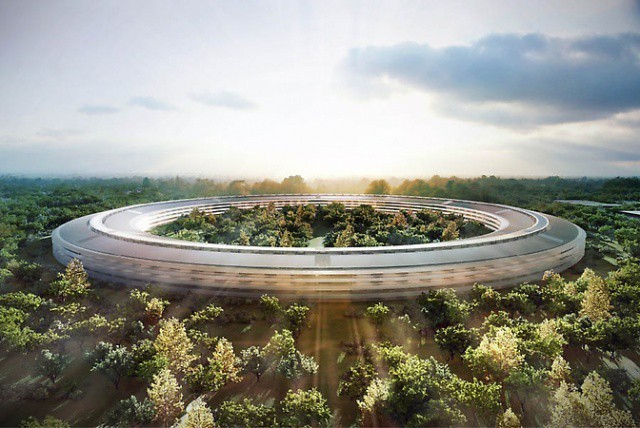 Six years in the making, every detail of the flashy $5 billion project has been thought of, down to the custom-built door handles. It was Steve Jobs’ passion project and he wanted no seam, gap, or paintbrush stroke visible for a clean fit and finish.

The doughnut shaped campus consists of 8 buildings, separated by 9 mini-atria, and uses only curved glass for its walls, providing views of the inner courtyard or to the landscape facing the exterior of the building. Besides the photographic four-story, primary circular building, that provides open, collaborative workspaces for employees, there’s an underground auditorium for hosting events, a fitness center, a cafe, and a visitor’s center.

And, because it’s located in Cupertino, California, should things start shaking due to an earthquake, the main building’s steel base will allow it to move nearly five feet and still keep the lights on.

So perfect is the design that it’s rumored the doorways have perfectly flat thresholds because, “if engineers had to adjust their gait when entering the building, they risked distraction from their work.”

Next on the list is the Ping An Finance Center, officially the second tallest building in China and the 4th tallest building in the world. Located in Shenzhen’s prominent Futian District the skyscraper, designed by Kohn Pederson Fox Associates (KPF), the center features 100 office floors above a retail and conference podium.

This unique building encompasses a central atrium. Allowing daylight in, and creates a welcoming space for meeting, shopping, dining and transit options.

At the top of the building, the facade tapers to form a pyramid, which was designed not only for aesthetics, but for improved structural and wind performance.

What lands this building on our list isn’t the state-of-the-art, 63,800-square-foot, halo-shaped screen that’s the largest video board in U.S. sports. While the screen is impressive, it’s the eight-panel, retractable roof that resembles a pinwheel, and the glass wall that opens with the roof to let in fresh air, that make this a notable accomplishment.

The circular opening of the roof was inspired by the Roman Pantheon and each piece weights 500 tons. It takes about nine to 12 minutes to open or close and gives the optical illusion of a camera aperture, even though the panels are rolling straight along an inner rail from their open to closed positions. 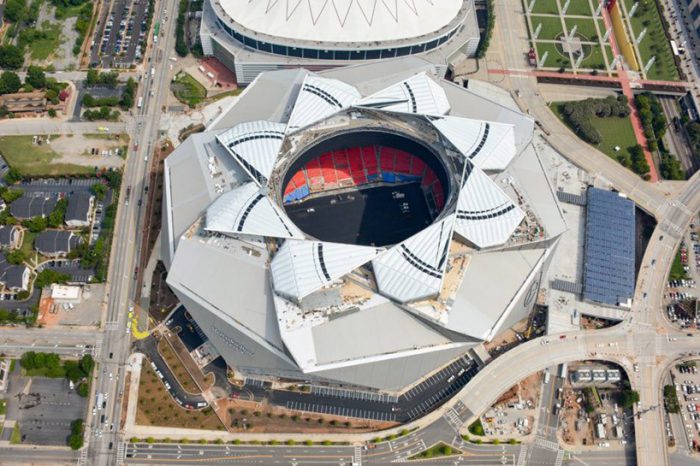 Less flashy, but still impressive is the fact that the Mercedes-Benz Stadium is the first LEED Platinum–certified stadium and the first sports venue to earn 100% of the U.S. Green Building Council’s water credits.

To complete the fan experience the facility features a 100-yard bar, affordable concessions and will host not only NFL games, but Monster Jam, WWE, collegiate tournaments, guided tours, private events and concerts.

Of course it is still an emerging build method but the uses and benefits are numerable. Among the factors in the technology’s favor are productivity gains, reduced labor costs and safer working environments. There is also the potential to be used for one-off, complex building designs that are not technically and economically feasible at present.

While exciting, and a trend to watch in 2018, in the near future look for 3D printing to be used mostly to make specific building components.

Seeing a building come to life is often challenging and fraught with setbacks. But our examples show innovative, imaginative, efficient buildings being built and using new technologies like construction project management software, robots, 3D modeling and drones to streamline the process and get the job done.

Available on the App store

Get it on Google play